Hey guys Witch Doctor Tackle Pro Staffer Brian Casey here.  I wanna tell you guys about the Witch Doctor Tackle Kahuna series and a technique that I use them for, where other anglers would commonly rely on spinning gear.  Being from up in the north country we as fishermen chase a lot of big smallmouth.  One of the best ways to cover water and find these fish is with a paddletail swimbait.  When it comes to throwing a swimbait I want to be able to make long accurate casts and have a rod that will handle the fight that these brown beasts deliver!  Keeping them hooked up as these fish run at you, jump, deliver massive head shakes, and other tactics they use to avoid capture, the Kahuna rod takes their advantages away. 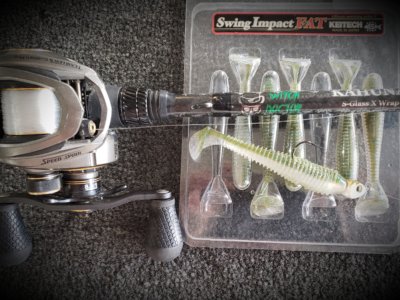 I’ll give you my setup…

For my swimbait setup itself, the majority of the time I’ll use a 3/8 oz swimbait jig head with a 3.8″ Keitech (usually in Smallmouth Magic).  If you typically throw a lighter paddletail step down to the 7′ MH Kahuna with say 8 to 10 lb test line.

Now throwing this bait is fairly simple weather I’m swimming it through the water column or creeping it along the bottom.  Because the Kahuna has amazing sensitivity and I’m using a light wire hook, I don’t need a huge hook set. The Kahuna just simply loads up as I give a sweeping pull and reel into them.  This is where the long extended load of the Kahuna and the 8.3:1 gear ratio reel come into play.

The Kahuna also has a reinforced butt for increased power in a glass rod, so as the fish run, jump, and head shake this rod and reel combo allow you to keep them hooked up.  When they jump the extended load of the Kahuna always keeps good line tension.  As they run at you the extended load and fast reel gives you the time to catch up to them without losing tension.  Lastly the soft load of a glass rod excels when that smallmouth delivers that last minute run at the side of the boat.  So all this being said, get yourself a Kahuna and land more fish. 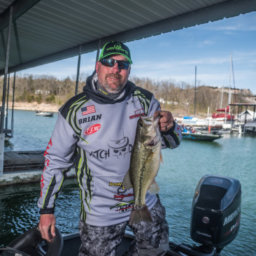 Taking it to a New Level

As an angler, there are certain variables that are out of your control, the weather and lake/water levels.  Now throw…