Mike Surman Lands a BIG One!

During his scouting trip to the Harris Chain, Witch Doctor Tackle Pro Mike Surman tangled with a true Florida beast of a largemouth and landed this 10 lb 6 oz bass!  Since Mike was doing some initial scouting for the upcoming FLW Tour event, he was doing more looking, than fishing, but it is a good thing he did.  “I found an area that looked really good and no other boats were around, so I thought I would make a few casts with a Gambler Burner Worm,” said Mike.  “Then suddenly I got a hit and my Oracle Pitchin’ Stick loaded up!”

Mike is hoping that this big bass and what he learned on this trip will pay off in two weeks when he returns to the Harris Chain for the second event of the FLW Tour Season.  Like last year, Mike feels that the Harris Chain is fishing well and it is going to take one or two big bites a day to be in the hunt.

Mike played an integral role in testing out the initial Oracle prototypes and is still in love with the rod every time he picks it up.  “The Oracle is so light, yet it has so much power to it.  With it’s moderate tip, the rod will load up and allow you to do a sweeping hook set and with it’s solid backbone, there is no way a bass is getting off!”

Since the Oracle Pitchin’ Stick is so light, an angler can flip or pitch all day and not get fatigued.  “My fishing has improved so much by using the Oracle, I don’t miss many fish with it and I no longer have tennis elbow, so I can fish all day!” 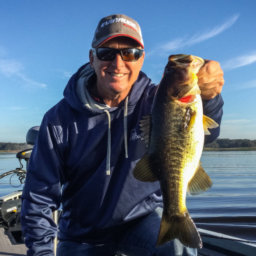