This last weekend I fished in the Classic Bass Champions Tour Open that was held on the world renowned smallmouth fishery, Mille Lacs Lake in central Minnesota. The Champions Tour is a Major
League Fishing style event, where very fish over 12” matters.  The twist is the lake will be split in half and you do not know where the split will be until the night before the tournament. For this event, the lake was split into an east section, that we would fish in the morning and west section for the afternoon half. 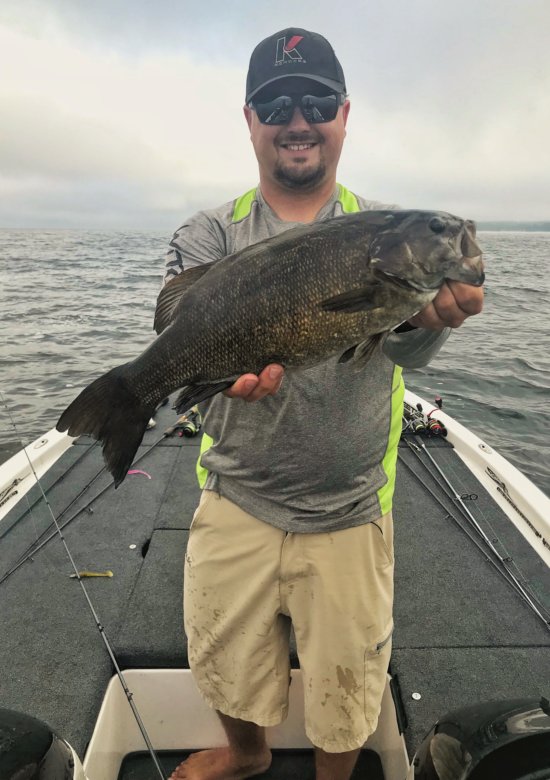 I started the morning off running to a confidence area that will usually hold a few active fish right away. This would allow me to throw a moving bait and hopefully get a few fish to hit the scales right away and calm my nerves. I picked up my 6’10” Medium Shaman casting rod with a finesse swimbait tied on. This has become my go to set-up for finesse swimbait fishing for smallmouths. I was able to connect 30 minutes in with a 3 lb 14 oz fish. It was a perfect way to settle down and get into the day.

I marked a few fish on my graph so I would spot lock with my Ultrex and drop a drop shot down to them. I managed a few walleyes before I hooked into a 2 lb class smallmouth. As I am fighting this fish it jumps right next to the boat and comes unhooked, this was one missed opportunity that I had a feeling that might hurt me at the end of the day. I continued to move around the east side of the lake looking for active fish on top of some flats and reefs in the 6 – 12 ft range. I hit my favorite spots, but was unable to trigger another fish to eat. Since there is a live leader board you know exactly where you stand. With my one fish earlier in the morning I knew I was still in the top six.

At about 9:50 AM I made a run to a spot that I have a large isolated boulder marked in about 20 ft of water. These isolated boulders are what I look for to hold a few fish once they move to their deep summer time spots. On my first drop I was hooked up again this time I knew it was a better fish. As soon as I set the hook it took off running and just bull dogged me. I like to use a 6’10” ML Fast action rod for drop shotting. I like a rod with a soft tip so I can let the fish eat the bait and they do not feel any resistance. When I set the hook this rod goes right into the back bone of the rod and allows the hook to do its job pinning the fish right in the top of the mouth. Using 6 lb braid mainline to a 6 lb fluorocarbon leader having a rod that can absorb the runs and head shakes of these angry smallmouth is very important in getting them to the boat.

After getting my second fish in the boat I have enough time to run to one more area that has a few boulders all right next to each other. I drop on the first boulder and was not able to get a bite. I slide off to a second boulder and I marked a fish right on top of the boulder, but I wasn’t able to get it to bite. I switched my bait to a small minnow shaped bait. The bait had black top, clear bottom with purple flake, last year one of my co-anglers was able to catch fish on a black 3” Senko while fishing these boulders so I had to give a dark bait a try. I drop it down to this boulder and I get bit right away. After a short fight I get the fish into the boat and weighed and I crank up to make the run back to check in at the end of the first half. I only landed three fish in the morning, but I was sitting in 4th place with just over 10 lbs, only 3 lbs out of the top spot.

After a one-hour lunch break we head back out to the opposite side of what we fished in the morning. I ran to a flat that has a boulder on it the side of a small car. I know this boulder has fish. I was able to hook up and land a three fish right away in the afternoon off this one boulder. I ran to a few other areas of the west side of the lake, but just couldn’t get a bite. So I ran back to the boulder I caught three fish off and managed to catch one more good fish putting me at 19 lbs. At this point I was about five pounds back from the lead. I had one hour left and I headed south in search of one more bite to try and propel me into the lead, I ran a few areas but just ran out of time.

I headed back to the dock in 4th place, which qualified me for the Championship that is on August 31st, at a location that has yet to be announced. Even though it was a tough bite I made good decisions all day. This event really showed me that if you fish hard and fish the conditions you have in front of you good things will happen. 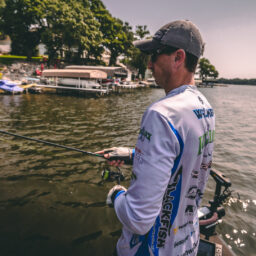