Sturgeon Bay: A fishery known for giant walleyes, salmon, trout and my favorite fish to catch smallmouth. This past Memorial Day weekend I finally had the opportunity to specifically target smallmouth in the bay. This lake has been on fire so far this year, the numbers and size of fish that have been caught have just been insane. Anybody who likes fishing and has social media most likely saw the almost 9 lb smallmouth caught in the Sturgeon Bay Open Tournament. That’s the type of fish every angler dreams of catching and that’s what I was after. 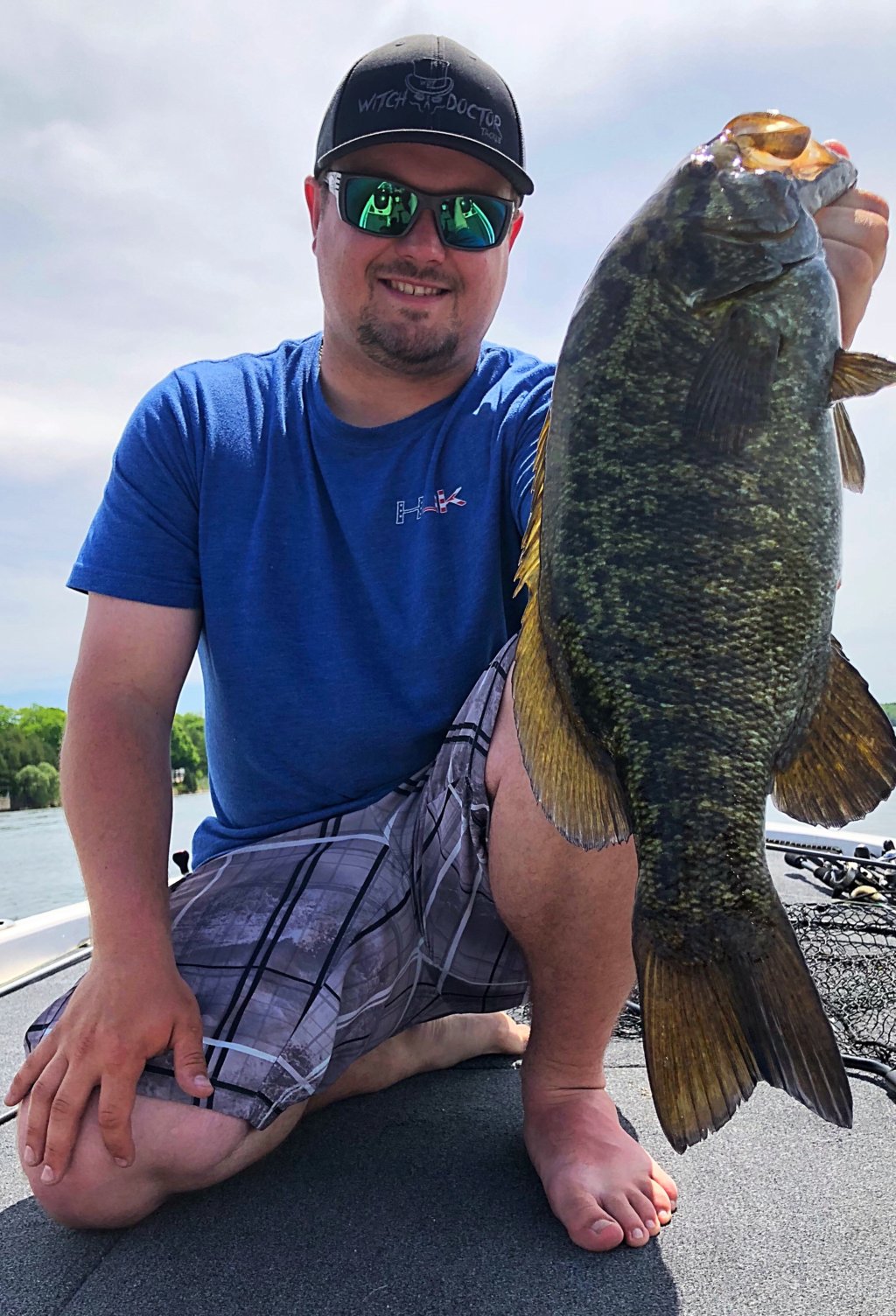 Saturday was our first day on the water and our first spot we came to is a well-known community area that will hold fish pre-spawn as well as fish in the prime-time hours. We found a small stretch in this area that had a little bit of a point coming out of the shore and it had basketball sized boulders on it right next to deep water. This is a perfect feeding grounds for hungry fish. We started with moving baits seeing the water temps were 58 – 60 degrees. Jerkbaits and finesse swimbaits were the first choice.

I had my jerkbait tied on a Surman 50G 6’6″ MH, with a high speed reel and 12 lb fluorocarbon. The finesse swimbait was on a Shaman 6’10” M casting rod with a high speed reel and 15 lb fluorocarbon. In our first ten minutes of being on the water we had five fish in the frive lb class follow our baits to the boat without hitting. Almost every cast we had a fish chase our bait to the boat. Finally, I figured out we needed a longer pause with the jerkbait to get the fish to commit. A 2-3 second pause was key to getting bites. Once I did this I was able to catch a nice 2 – 2.5 lber for my first Sturgeon Bay smallmouth.

In the afternoon a severe storm front was quickly approaching. I picked up a finesse swimbait and went to work. As soon as we got into the area we saw fish in the morning my swimbait got crushed, but I was not able to get a hook into the fish. I reeled in and fired another cast in the exact same area. Less than five cranks into my retrieve I got crushed again. This time I was able to get the fish to the boat. A solid four lb class fish. A quick picture and a smooth release lead to a quick cast where I was hooked up again.  Another four lb class fish made its way into the net.

Sunday was a search and destroy mission. We spent most of the day running around trying to cover water specifically looking for where the smallmouths were starting to bed. We focused our efforts on shallow rock and sand flats. This was our first clue the fish went from pre-spawn to full blown spawning in less than 24 hours. We caught a few smaller fish Sunday up shallow, but it wasn’t until later in the day we figured out where they were however they would have to wait until the following day.

Monday started out with rain right away in the morning so we opted to eat breakfast and let the front pass before we got on the lake. While cruising around with the trolling motor we fished moving baits while looking for beds. The day ended up being a bed fish beat down. We caught a few fish on swimbaits, but a majority of our fish came sight fishing. We used three primary baits for sight fishing. A Ned rig, a tube and a drop shot. These fish were so locked on beds. The first bed we came up to the fish was right below my trolling motor and it never moved! We fished these baits on a 6 foot 10 inch or 7 foot medium fast action rod. On all of my spinning rods I run a braid main line to a fluorocarbon leader. Having a softer tip on the rod helped us hook up and fight these angry smallmouths. Our best five fish on Monday pushed 25 lbs. I can see why so many people go to Sturgeon Bay every year. I will definitely be heading back very soon.