Taking it to a New Level

As an angler, there are certain variables that are out of your control, the weather and lake/water levels.  Now throw in being a co-angler, and you have other items out of your control, such as where your boater is going to take you and how he is going to position the boat.  But by taking care of the things you can control, you can set yourself up for a successful day on the water and hopefully a successful tournament finish! 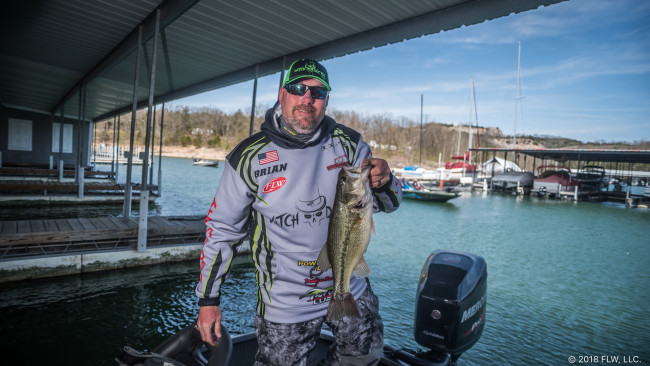 This year I decided I needed a new level of competition and performance, so I teamed up with fellow Witch Doctor Tackle pro staff member, Gunnar Megar fish the FLW Costa Series Central Division as a co-angler.

At the end of last year I had the chance to put several Witch Doctor Tackle Rods in my hands and was amazed at every detail of the rods.  Over the winter I decided to team up with what in my mind is the most amazing rod company, Witch Doctor Tackle. Some will ask, “Well what makes them the most amazing rod?”  I easily respond  with “they are ultra-sensitive, very light, and the double locking reel seat ensures your reel stays tight. Lastly Witch Doctor has a rod for every technique and situation.”

Last week at Table Rock Lake I put these rods to the test during the first Costa Series event of 2018. There were many ways to catch fish on Table Rock,  but I had to decide what was going to give me the best chance to succeed as a co-angler. During practice it was very tough weather, with cold fronts and warm fronts and the spawn. With water temps in the low 50’s these fish were positioned both deep and shallow.

I threw a crankbait, Alabama rig, spinnerbait, small swimbait, jig, jerkbait and a few other baits. When it came down to the tournament I had to pick baits I thought that would be different and would cover all depths of water. So I decided one was going to be a 1/2 oz Keitech Finesse Football Jig with a Keitech crazy flapper for a trailer. I fished this on a Witch Doctor Tackle Shaman 6’10 MH with a Revo Rocket, spooled with 12 lb FC Sniper line. This rod was short enough for flipping close cover and long enough to make long casts while dragging rocky points.

My second rod was a Surman 50G 6’6″ MH paired with a Revo MGX and 10 lb FC Sniper, had a Megabass Jerkbait tied on to it. This combo was very light weight causing little to no fatigue.

Rounding out my top three set up’s for this event, was a Shaman 7’3″  ML with a Revo MGX, with 8 lb FC sniper and 1/4 oz Picasso Smartmouth with a 2.8″ Keitech Swing Impact Fat Swimbait. This set up was so light and sensitive you could feel the lightest bites when the fish were being very inactive.

When it was all said and done, with out the performance of smaller pound test fishing line, the right baits and most importantly the right Witch Doctor Tackle rods, my 39th place finish against the stout field of 200 competitors wouldn’t have been possible.